Digitalisation could increase Spanish GDP by 48.5B dollars

153
SHARES
1.9k
VIEWS
Share on FacebookShare on Twitter
">
Barcelona, Spain, September 14, 2017- Spain has the chance of increasing its GDP by 48.5 billion
dollars, an additional 3.6%, for 2021. This is one of the main conclusions of
the report “Opportunity of the Digital Economy in Spain: How digitalisation can
speed up the Spanish economy” produced by Mobile World Capital Barcelona
(MWCapital) and the consultancy Accenture Strategy. The study, which analyses
the state of digital transformation in Spain and its opportunities for
improvement, was presented yesterday at the 31st Meeting of Telecommunications
and Digital Economy held in Santander.
The
report bases the analysis of the state of digitalisation in Spain on the
results of an index measuring the digital economy opportunity (DEO) established
jointly by Accenture and Oxford Economics. This methodology is based on the
assessment of three main influences under which the digital transformation
process is developed: digital talent, digital technologies and digital
accelerators.

Digital
talent: This measures the degree of digitalisation of work and the skills and
knowledge required to carry out specific jobs.
Digital
technologies: This refers to the production assets available to tackle the
digital transformation processes (hardware, software and communication
equipment).
Digital
accelerators: This measures the behaviour of a series of factors in the
environment that contribute towards the development of the digital economy,
such as culture, the regulatory framework or demand.
The
analysis of these three areas places the US and UK economies as digital
leaders, whereas Spain stands below the digitalisation average in relation to
its European competitors. This position, however, reflects the country’s future
growth and improvement potential, as well as the aspects on which greater
emphasis must be placed to speed up the economy’s transformation process.
The
major impact of the 2008 crisis, which had a direct effect on the three
indicators analysed in the report, is one of the many reasons that have led to
the slowing down of the digitalisation index of the Spanish economy, which has
grown below the remaining economies analysed during the same period. The report
highlights the reasons for this delay through the three influences forming the
analytical framework of the digital economy.
The
scarcity of digital talent is one of the main causes of the delay in terms of
digital skills. The digital transformation process requires a high density of
digital talent, although the supply at present in Spain does not meet the
current demand for this knowledge. The traditionally low salaries of the ITC
sector, youth unemployment (leading to low penetration of millennials in the
employment market) and low demographic mobility are just some of the reasons
for this lack of talent.

In
terms of digital technologies, the lack of digital strategy and the uncertainty
with regard to the profitability of new technologies and the operational
complexity of Spanish businesses are restricting digital transformation. What
is more, investment in innovation and the technology transfer capacity from
research centres and universities to the market is lower than those of other
European economies.
The
regulatory framework and the limited access to funding are other factors to
have helped in the delay of Spanish digitalisation in terms of the last
influence of the DEO index: digital accelerators. The study, however, includes
a series of recommendations to optimise the distribution of efforts over the
three areas of the digital economy in order to maximise the impact and
financial return on the country’s economy.
Spain
is faced with a great opportunity for the growth of its economy, which includes
defining an ambitious, large-scale digital strategy. Changes in training
include the rapid growth of professional re-qualification, new work models and
new talent. In terms of technological resources, the focus is placed on
investment in infrastructures, the deployment of high-impact technologies such
as 5G, the promoting of private R&D&I through public policies and the
encouragement of new forms of collaboration, including startups, SMEs and major
corporations such as Corporate Venturing.
Lastly,
the report indicates initiatives required to face the growth opportunity of
GDP, such as tax incentive policies, adaptation of regulations to decrease
barriers to access technologies, an increase in data security and protection,
adaptation of schools in terms of infrastructures and curriculum, and the surge
of innovation centres. 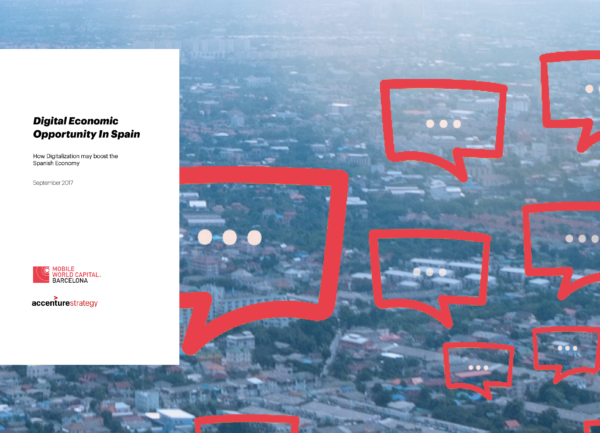 Acronis, the global leader in cyber protection, receives more than $250M investment at a $2.5B valuation