Japanese investor SoftBank has marked
down the value of two of its largest Indian start-up investments Ola and
Snapdeal. SoftBank has written off around $550 million in the value of shares
in its investments in India, which include ANI Technologies, owns India’s
largest cab aggregator Ola, and Jasper Infotech, which runs e-commerce
marketplace Snapdeal. Business Standard reported recently.
Around half the value of the
mark-downs is due to the Japanese currency’s appreciation against other
currencies.
In its consolidated earnings for the
six months ended September, SoftBank reported a loss of 58,140 million Japanese
yen ($557 million) from financial assets at fair value, mainly due to its
investments in India. Of this, 29,622 million Japanese yen ($284 million) was
recorded as a loss due to the year-on-year appreciation of the yen. 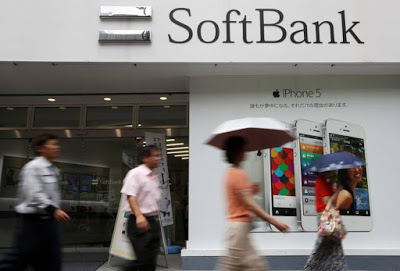 “Gain or loss arising from financial
instruments at FVTPL comprises mainly changes in fair value of preferred stock
investment including embedded derivatives, such as ANI Technologies Pvt. Ltd
and Jasper Infotech Private Limited in India, designated as financial assets at
FVTPL (fair value through profit or loss),” said the company in its filings.
SoftBank led a $210-million investment
in Ola and $627 million in Snapdeal in October 2014. It has also made follow-on
investments in both firms.
The mark-down in Ola’s value comes at
a time when the company is struggling to raise fresh funds of as much as $1
billion to take on global rival Uber. Recent reports said the firm was looking
to raise $600 million from investors, which include SoftBank.
While Ola continues to lead the Indian
market, in a span of three short years Uber has been able to catch up and with
its deep pockets is challenging the Indian firm’s leadership.
To Ola’s dismay, after Uber lost to
Didi Chuxing in China, it has stepped up its focus on winning India and has
pledged to invest a substantial portion of the $3.5-billion it raised from
Saudi Arabia’s Public Investment Fund in June. Ola’s valuation had peaked at $5
billion.
Snapdeal’s value, too, has eroded due
to global competition from Amazon, which has overtaken it as the second largest
e-commerce marketplace in India. The company was valued at $6.5 billion when it
raised $200 million led by Canada’s Ontario Teachers’ Pension Plan in February
this year.
Early this year, e-commerce market
leader Flipkart, too, suffered a similar fate when investors such as Morgan
Stanley, T Rowe Price, Valic, Vanguard and Fidelity marked down the value of
their stake in the company by nearly a third. The company’s value fell from a
peak of $15.2 billion to $9-11 billion.
It is not possible to ascertain the
exact value of both Ola and Snapdeal after the mark-down by SoftBank since the
firm did not break out individual details of the drop in fair value of its
investments in the two companies.
SoftBank has so far invested close to
$2 billion in India, with chief executive Masayoshi Son telling the media in
May that the company’s investment could exceed $10 billion over the next 5-10
years.
Tags: News
Previous Post

Enormous business scope for IT cos in India: Union Minister Ravi Shankar Prasad