154
SHARES
1.9k
VIEWS
Share on FacebookShare on Twitter
">
Barcelona, Spain, 30 June 2017– 4
Years From Now (4YFN), the Mobile World Capital Barcelona (MWCapital) global
business platform for the growing community of technology startups, has awarded MailTime as the most innovative digital
project at the Shanghai edition of the 4YFN
Awardstoday. This startup, based in China and USA, focuses its
activity on instant messaging, and as the winner, will have its own exhibition
space at the 2018 edition of 4YFN Barcelona. 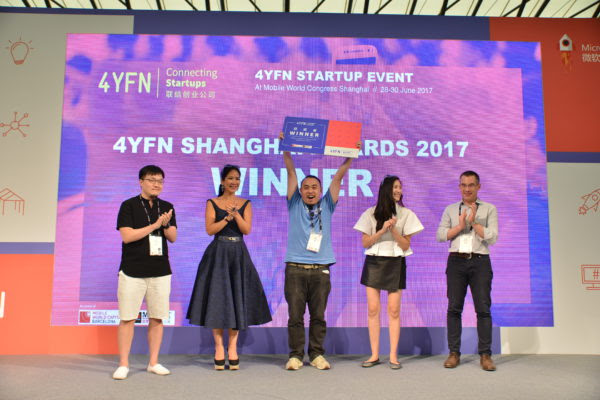 The
jury, comprised of membres of 4YFN Investors Club as Kim Leitzes, Entrepreneur
in Residence at Click Ventures; Donna Nguyenphuoc, Partner at SPARQ Capital;
Nicolas du Cray, Investment Director at Cathay Innovation; and Panda Wan,
Founding Partner at Discovery Investment Group, selected MailTime from among
all the projects exhibited at 4YFN Shanghai. The other four finalists
were: OpenAsAPP (Germany),
application to convert job documents in interactive applications; QLC (China), startup focus on exploring alternative
career and lifestyle experiences according to interest, goals and personal
pursuits; SmartGolf (USA),
a startup that works on the digitalisation of the golfing world; and ucfunnel (Taiwan), experts on IT, company projects
and advanced technical analytics.

The
prizes were awarded during GMSA Mobile World Congress
Shanghai, where 4YFN gathered nearly 150 startups from 16
countries. Among the international presence, startups from China, Korea, Spain,
Germany, Israel, India and Japan stand out.
Over
three days, 4YFN organised a full programme of activities aimed specifically at
entrepreneurs, investors and large corporations. The event schedule included
startup pitching sessions and networking activities. Also, the meeting included
talks given by nearly 30 professionals, such as James Chou, CEO of Microsoft Accelerator Shanghai; Azita Arvani, Head of Innovation Partner & Venture
Management at Nokia; and Steven Tong,
Managing Director of Startupbootcamp Asia, among others.
In
order to connect with the Asian market, 4YFN gathered more than 40 members of
the international investment community, 4YFN
Investors Club, for a tour of the main centres in the Chinese
entrepreneurial ecosystem. The group got a first-hand look at Chinaccelerator,
the leading acceleration programme in Asia, and TechCode, a global incubation
platform that works to connect entrepreneurs from all over the world and
accelerate startup growth.
18 Spanish companies travel to
Shanghai with MWCapital

A
delegation of 18 Spanish companies, led by MWCapital, travelled to Asia as part
of a joint initiative with the Ministry of Energy, Tourism and Digital Agenda,
represented by the Secretary of State for Information Society and Digital
Agenda with Red.es; the Regional Government of Catalonia, represented by ACCIÓ;
and Barcelona City Hall, represented by Barcelona Activa.
Aleix Valls,
CEO of MWCapital, explains that, “for MWCapital, the main goal in accompanying
these Spanish companies to Shanghai is to help them to discover Asia’s
entrepreneurial ecosystem and the business opportunities offered by this
continent.” Valls adds that: “China is the ideal location for startups looking
to establish themselves in global markets and create international commercial
ties.”
Alvaro Martín,
Cofounder at Waterrevive (Madrid), one of the companies that took part in the
delegation, comments that, with MWCapital, they have achieved specific
contracts with Asian dealers. “We came here to open ourselves to the Asian
market and help them get to know our product. Taking part in 4YFN Shanghai has
opened new opportunities to amplify our list of customers. We hope to be here
again at the next edition,” adds Martín.
Tags: AwardsEventsNewsStartup News

International Women’s Day: Interview with Bex Gold, Founder of The Department of Brands