Facebook, Flipboard, MyTaxi and PayPal complete the line-up at 4YFN


4 Years From Now (4YFN), the Mobile
World Capital Barcelona (MWCapital) global business platform for the growing
community of technology startups, has completed the line-up for the fourth
edition of its event organised in partnership with GSMA Mobile World Congress,
with companies whose technological and innovational strength will be deployed
during the course of the programme of activities.

4YFN has selected the selection of
speakers based on their experience within the innovative business ecosystem.
Apart from the speakers announced in the initial programme, 4YFN has completed
the line-up with Nicola Mendelsohn, Vice-president EMEA of Facebook; Josh
Quittner, Editorial Director at Flipboard; Jonas Gumny, CSO of MyTaxi and
Harper Reed, Next Gen Commerceat PayPal. The line-up also includes other
prominent figures such as Bernardo Hernández, General Partner of e.ventures and
President of Solon Inversiones (formerly General Manager of Flickr and Senior
Director of Product Management at Google); Anne Mette Hoyer, Head of Business
Relations at SAP and Sabeen Ali, Founder and CEO of AngelHack, a global platform
that is a pioneer in the organisation of hackathons to drive innovation.

4YFN is closing its first 4-year cycle
with an entirely innovative and global programme. More than 100 talks by more
than 270 speakers of different nationalities and from various different sectors
are planned for between 27 February and 1 March 2017.

In addition to the latest
incorporations, the programme also includes appearances by Terry von Bibra,
Global Manager EMEA at Alibaba; Michael Spiegelman, Director of Product
Innovation for Growth & Acquisition at Netflix; Fernando Fanton, CTO of
Just Eat, and Sir Martin Sorrell, CEO of WPP Group. Furthermore, investors such
as Tim Draper, founder of the seed investment company DraperAssociates, and the
Israeli Dov Moran, one of the creators of the USB flash drive and the current
Managing Partner at Grove Ventures, stand out among the keynote speakers. 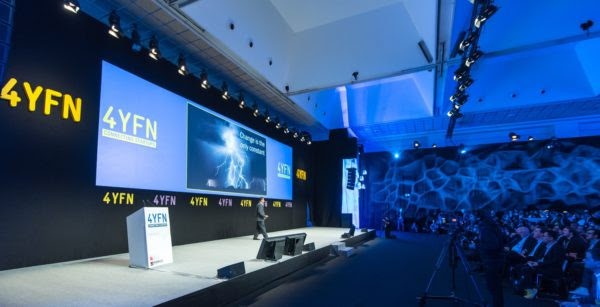 The 4YFN programme also includes a
round table session on scalability, international positioning and the sale of
tech companies in southern Europe. Lucas Carné, co-founder of Privalia, Gonzalo
Ortiz, co-founder of Mitula, Iñaki Ecenarro, co-founder of Trovit, Íñigo
Juantegui, co-founder of La Nevera Roja and currently the CEO of OnTruck, and
Javier Rubio, Chairman of Social Point, will take part in this debate with
Oriol Juncosa, Managing Partner and co-founder of Encomenda Smart Capital, a
company that advises and invests in startups.

The event will provide ideas on
tackling the needs of the entrepreneurial ecosystem in southern Europe and
promoting more successful sales and acquisitions.

MWCapital and GSMA offers a broad
range of options to the more than 20,000 visitors expected at this fourth
edition of 4YFN. This figure marks a 60% increase on last year and consolidates
4YFN’s role as a meeting point and business hub for international
entrepreneurs, startups, investors and large corporations within the framework
of the congress.

In parallel to the scheduled talks,
MWCapital also encourages networking among the visitors by means of activities
such as the Startup Pitching Sessions, Industry Networking Sessions and
Networking Drinks. 4YFN also boasts an app – 4YFNetwork – (available for
Android and iOS) designed specifically to boost contacts between entrepreneurs,
investors and large corporations.

The event will host the NUMA Barcelona
Demo Days and Startupbootcamp IoT& Data, both programmes supported by
mVenturesBcn, the MWCapital programme that promotes the creation and growth of
startups in the digital and mobile industries. Startups will also lead the
Hack_d_Gap Global Challenge organised by Women4Tech.

4YFN will have an exhibition area
housing more than 600 startups called Innovation Market and will gather more
than 700 investors. It will also host a total of 40 workshops and the 4YFN
Awards, which will reward the best startup in each of the event’s three key
themes: “Disrupted by Mobile”, “Internet of Things” and “Digital Media”.
Tags: Events
Previous Post

Snapdeal Fires about 600 employees; raises alarm for other e-commerce players

Significance of Ethical Entrepreneurship in the post COVID economy

The impending Tech Revolution in Healthcare