4 Years From Now (4YFN), the global business
platform for the growing community of startups promoted by Mobile World Capital
Barcelona (MWCapital) opened today the doors of the fourth edition of the event
that it promotes in collaboration with GSMA Mobile World Congress. The birth of
4YFN San Francisco, the first American edition of the event, was the main
announcement of the opening ceremony held by Yossi Vardi, Chairman of 4YFN, and
Aleix Valls, CEO of Mobile World Capital Barcelona.

From today until Wednesday 1 March, 4YFN Barcelona
will be represented by all the players in the digital entrepreneurial
ecosystem, reaffirming its role as an international meeting point for startups,
investors and large corporations. The Innovation Market, the exhibition area of
the event, has been filled with activity thanks to the participation of more
than 600 startups and 700 investors. Of note is the presence of national and
international delegations from France (La French Tech), United Kingdom (Trade
Fair UK Pavilion), Israel, USA, Argentina, Colombia, Sri Lanka, Pakistan,
Kuwait and Taiwan, which have also begun their programmes at the event.

The programme of the first day of the 4YFN event
has revolved around the theme of Disrupted by Mobile. Terry Von Bibra, Global
Manager EMEA of Alibaba, Fernando Fanton, CTO of JUST EAT, Harper Reed, Next
Gen Commerce of PayPal, Zach Weisfeld, General Manager of Microsoft
Accelerator, and Dov Moran, Managing Partner of Grove Ventures, were some of
the featured speakers of the day.

Throughout the day, nearly 40 sessions and
workshops were held, including ‘The Best And Worst Mistakes Startups Make When
Dealing With The Media’, moderated by Robin Wauters, Founding Editor of
Tech.eu. The panel also included the participation of Ravi Mattu, Editorial
Director of Financial Times, Josh Quittner, Editorial Director of Flipboard,
Mike Butcher, Editor at Large of Techcrunch, Patrick de Laive, Co-founder of
The Next Web and Maurizio Pesce, Tech Editor of WIRED Italy. To further enhance
the relationship between media and startups, Pitch the Press sessions (speed
dating between journalists and entrepreneurs) were also started today with more
than 500 meetings. 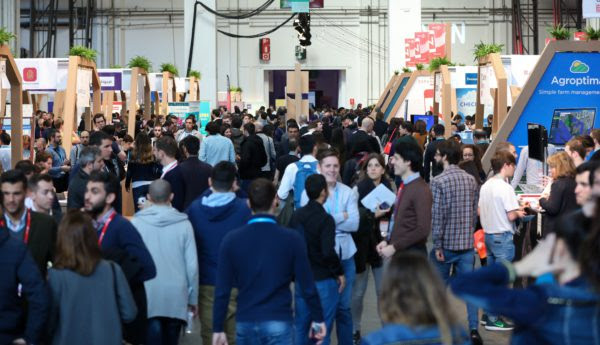 WeFarm has won the first startup competition of the
4YFN Awards, which have recognised the most innovative project in the field of
mobile technologies. This British startup has created a platform that helps and
connects farmers living in remote areas.

Tomorrow’s 4YFN Awards will feature prizes for the
best startup focused on IoT (Internet of Things). On Wednesday, the last
edition of the Awards will recognise the most innovative startup in the Digital
Media category.

IMPACT, FIWARE Foundation and MWCapital have
launched a new acceleration programme, IMPACT GROWTH, a new acceleration
program with a fund of €3.6 million and the final aim of identifying four
European super startups. In the first stage of the program, IMPACT GROWTH will
finance 28 startups with €100,000, equity free. Led by ISDI and FundingBox,
this initiative is also supported by Accelerace, ​​Kibo Ventures, Invesdor,
Danone, Ferrovial, DOCOMO Digital and MADE, among others.

The 4YFN activity continues tomorrow, Tuesday, with
presentations from speakers such as JP Rangaswami, Chief Data Officer of
Deutsche Bank and Marcus Weldon, Chief Technology Officer of Nokia.
Startupbootcamp IoT&Data demo day will also be held. This is one of the
acceleration programmes promoted by mVenturesBcn, a MWCapital project which
supports the creation and growth of digital startups.

Hack_d_Gap Global Challenge, promoted by Women4Tech
at 4YFN, will be one of the most outstanding spaces of the day. This GSMA
initiative will begin with a session on Diversity in Tech Ecosystem and
continue with the final of Hack_D_Gap Global Challenge. Finally, the programme
will include an interactive workshop on ‘How to create balanced teams’, which
will address the creation of teams in the near future.
Featured speakers on Wednesday 1 March include
Michael Spiegelman, Director of Product Innovation for Growth & Acquisition
of Netflix, and Nicola Mendelsohn, Vice President EMEA for Facebook. The day
will also include the holding of NUMA Barcelona demo day, another of the
acceleration programmes promoted by mVenturesBcn.
Tags: Events
Previous Post

Facebook, Flipboard, MyTaxi and PayPal complete the line-up at 4YFN

Mrida inks an MoU with Hungary based FreeFrom Hungary Ltd.