by StartUp Terminal Bureau
in Funding
0

Mojocare Secures US$20.6 Mn in Series A Funding

New Delhi: Mobile balance management service app True Balance today announced
that it has raised a sum of Rs. 100 crore in Series B round of funding from
Softbank Ventures Korea. The company said that some renowned VCs came only
after eight months since Balance Hero received the Series A investment in April
2016.

With this development, True Balance will be looking at an
accelerated growth towards achieving a 100 million downloads for the next year.
The investment includes additional funding from the global venture capital firm
SoftBank Ventures Korea which participated in the Series A round and funding
from new investors including IMM Investment, Mega investment, Korea Development
Bank, and Capston Partners.

The utility app True Balance developed by Balance Hero crossed 10
million downloads in July last year in just 19 months after it was officially
launched in India.

The additional investment was made possible as Balance Hero’s
capabilities of rapidly grabbing market share in the Indian market were
recognized. 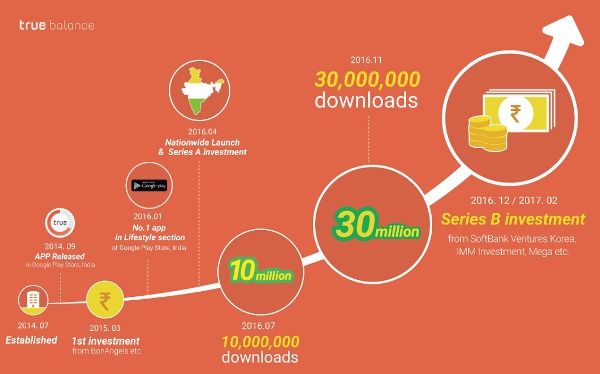 “The additional funding will help us spur our business growth even further. True Balance has been growing exponentially
passing the 30 million download mark, targeting 100 million by the end of this
year. We have also recently introduced the ‘one click recharge feature’ to
dramatically improve the convenience of mobile life,” added CEO of Balance
Hero, Cheol-won Lee.

“The most impressive investment of the previous year was
Balance hero,” said president and CEO of SoftBank Ventures Korea, Gyu
Hak(Greg) Moon.

“Within the first year of investment, there was 3000 percent
growth in app downloads, and this denotes the company’s growth. Due to rapid
expansion of Indian market, the company’s estimated potential seems to be even
greater,” added Gyu Hak.

“Balance Hero is preemptively providing a must-have service
for users in the rapidly growing Indian market, and we decided to invest in the
company because we expect the number of users and their revenue to grow,”
said CEO of IMM Investment, Seong-bae Ji.

“We hope to see more Korean startups succeed in mega markets
like China and India, and we will actively support Balance Hero so they can
become a model case,” added Seong-bae.

‘My passion for North-East India region is what keeps me going’- Sange Tsering, Founder and Guide, Holiday Scout

'My passion for North-East India region is what keeps me going'- Sange Tsering, Founder and Guide, Holiday Scout