AB InBev Africa’s agricultural development vision for
South Africa is to increase hops produced by around 150 tonnes to over 1 000
tonnes per year, of which more than 250 tonnes will be for the export market.
The AB InBev Hops Network workshop, held with global
brewers and innovation teams, will take place from February 27 – March 3 in
George, one of only four locations in the Southern Hemisphere where hops have
been successfully cultivated since 1935. The aim of the Hops Network is to
introduce the South African varieties to the AB InBev craft industry and
innovation department.

“We hope they will be equally as excited about these
locally-bred varieties as we are, and want to use them in their beers
globally,” said Willy Buholzer, AB InBev Hops Director.
With 424 hectares of hops growing in the Southern Cape,
South African Breweries Hops Farm (SABHF) and contracted private growers
currently harvest less than one percent of the world’s total produce – up to
855 tonnes each year. Of this, around 735 tonnes is for SAB and local craft
industry and 120 tonnes is exported into Africa, primarily for SAB beers.
AB InBev has committed to continue supplying hops and
malt to the craft industry, currently supplying the local market with more than
20 tonnes of hops annually.
In the last five years, SABHF has launched three new
aroma and flavour hop varieties, namely Southern Aroma, African Queen and
Southern Passion, and has increased these to 24 hectares under cultivation for
crop 2017. “We are hoping to expand this to about 100 hectares which will take
the overall industry to about 500 hectares as demand grows,” said Lauren
Steytler, GM of SAB’s Hops Farms.
As part of AB InBev’s public interest commitments the
company has undertaken to invest R610-million into strengthening the South
African agricultural landscape.  “We will
support small-holder farmers by financing 800 new emerging farmers and 20 new
commercial farmers to produce hops, barley and maize, with strategic intent to
create 2 600 additional jobs in the agricultural supply chain. 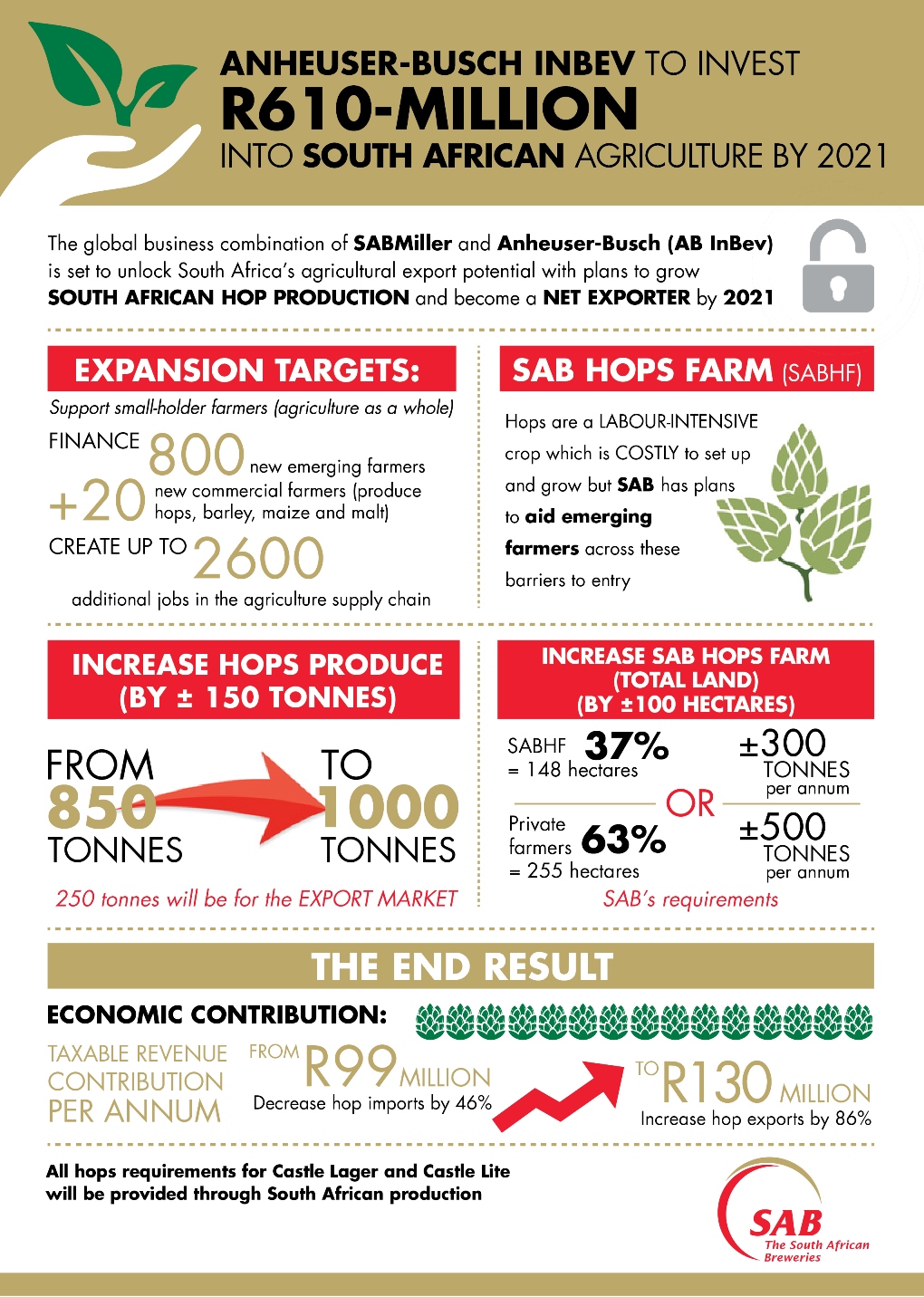 Hops are a labour-intensive crop which is costly to set up and grow but SAB has plans to aid emerging farmers across these barriers to entry.


In support of its public interest commitments, SAB is
increasing investments in research and development, offering incentivised
pricing structures and preferential loans for emerging famers, as well as
long-term contracts of up to 10 years to purchase their hops. The commitment
will also support other enterprise development initiatives including farmer
training and business incubation and the localisation of agricultural inputs
into the production of beer.
Through a fund and loan from SABHF, a 20 hectare hop farm
was purchased, which will be managed by a black woman entrepreneur. Through
delivery of key performance indicators and once the loan has been repaid, the
farm will be 100% owned by the entrepreneur.
“Jobs and inclusive growth are central concerns to the
local economy. AB InBev is excited about the growth opportunities and role that
South Africa will play in the business, as we continue to make important
contributions to the economy and society,” said Rogers.
Tags: Events