152
SHARES
1.9k
VIEWS
Share on FacebookShare on Twitter
">
Barcelona, Spain, 31 August 2017-
4 Years From Now (4YFN), a Mobile World Capital Barcelona (MWCapital) programme that
offers a global business platform for the growing community of technology
startups, touches down in Silicon Valley for the first time ever. The meeting, in which 150 international
startups will participate, will be held within the framework of the first
edition of the GSMA Mobile World Congress Americas, in partnership with CTIA,
from 12 to 14 September.

The participating startups will have the opportunity to
exhibit their projects to more than 30,000 representatives from across the
mobile industry. The entrepreneurs will offer a wide range of solutions from
within various sectors such as gaming, entertainment, marketing and
finance. 4YFN Americas has
entrepreneurs from more than 20 countries, including Colombia,
Greece, Spain, Singapore, South Korea, Finland and USA.
Over the three days, entrepreneurs, investors and large
corporations will take part in a programme of activities, including
presentations from industry experts such as: David Fisher, Vice President,
Business & Marketing Partnerships, Facebook; Robert Scoble, Partner,
Transformation Group; Azita Aravani, Head of Innovation Partnering & Ecosystem
Ventures, Nokia; Kurt Hoppe, Connected Car, IoT and Disruptive Innovation,
General Motors, and Chris Gottschalk, Principal, Blumberg Capital.
The event schedule will also include startup pitching
sessions, workshops, networking activities and the 4YFN Awards, which
recognises the best startup taken from three main categories: identity,
blockhain and cyber-security; IoT and artificial intelligence; and augmented
and virtual reality.

4YFN offers journalists the opportunity to take part in the
pitch the press sessions, where you will be able to discover the best stories
among targeted and sector-specific startups exhibiting at the venue.
In addition to the 4YFN editions in Barcelona, Shanghai and
Tel Aviv, 4YFN is increasing its presence at large international events in
order to unite industry professionals with the digital entrepreneurial
ecosystem to strengthen and establish further ties between worldwide
markets.
Tour of the innovative Silicon
Valley ecosystem
The startups will be taken on a tour of the innovative
Silicon Valley ecosystem, where they will have the chance to visit, among other
places, Google HQ. This activity has been organised so that entrepreneurs can
witness first-hand the technology giant’s latest solutions and most innovative
projects.
Esteban Redolfi, Executive Director of 4YFN says, “Through
the creation of 4YFN at Mobile World Congress Americas, we are building a
much-needed bridge between European ecosystems and the various ones across the
US.The presence of 4YFN in Silicon Valley was a must, given that it is home to
some of the largest technological brands, and a place we simply must explore
together with the technology startups.” 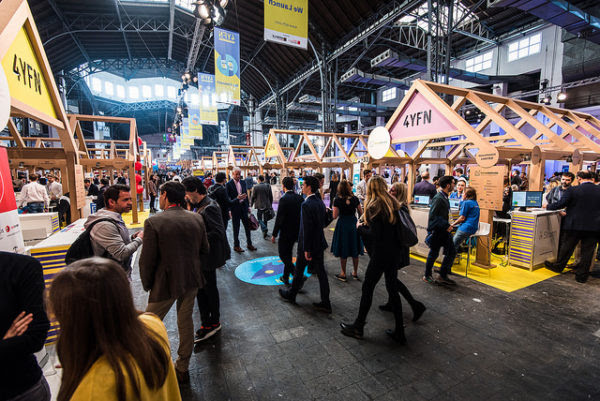 Delegation of Spanish companies in
San Francisco
MWCapital will travel to San Francisco with a delegation of
28 Spanish companies, all associated with technology and innovation. This
initiative is being promoted in conjunction with the Ministry of Energy,
Tourism and the Digital Agenda, represented by the Secretary of State for the
Information Society and Digital Agenda, and Red.es, the Autonomous Government
of Catalonia, along with ACCIÓ and Barcelona City Council, through Barcelona
Activa, to promote the Spanish corporate fabric within the technological sector
and to strengthen ties with the American market.
Tags: EventsNews